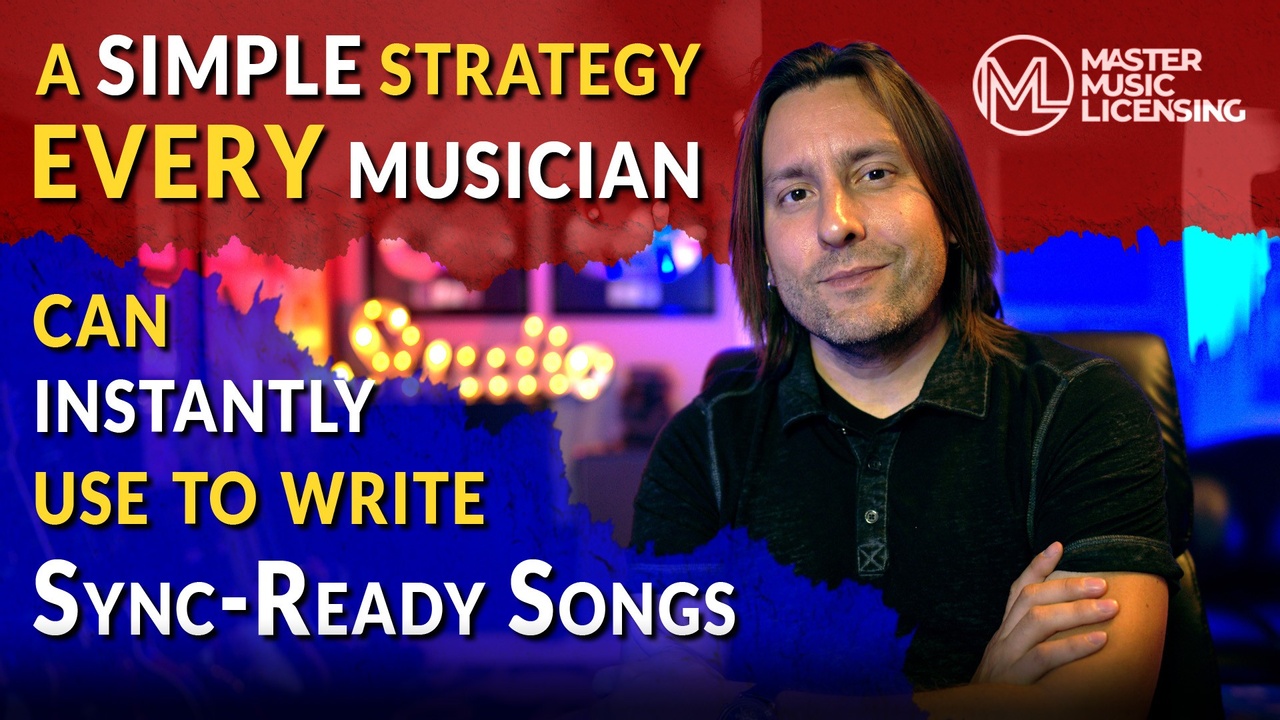 Today I'm going to share with you my #1 writing secret that I've used for years to help inspire many of my songs that have been placed in TV shows, Film Trailers and Commercials.

I often hear musicians and songwriters say, "I'm writing for sync." But when I listen to their songs, they have nothing to do with sync. They're writing songs about dirt roads and Chevys (granted, I now live in Nashville, which is the home of country music... but I digress). The only time that a song about dirt roads and Chevys is ideal for a sync placement is when the scene involves a Chevy driving down a dirt road!
When you're writing music for TV, you have to remember that the story is already being told visually. Your song doesn't need to tell the story... your song must compliment it!

If You Want to Write for TV, You Should Write to TV.

Over the years I've discovered one of the easiest ways to get started writing a song that's ideal for placement opportunities is to actually have a TV playing in your studio while you're writing. Just turn it on, and turn the volume off.
What you're watching will play a major role in the type of song you create because the visuals, which include the pacing, emotion, action, and mood of the scene, will inspire what you're writing.
With wireless streaming devices such as Roku and the Amazon Firestick, all you need is a TV with an HDMI port. Since virtually all of us have wireless internet in our homes, with these devices we can have instant FREE access to an unlimited number of TV shows and Films.
While there are paid services like Netflix, Hulu, HBO or Disney Plus, the following FREE channels (known as apps on these devices) are where I like to go first depending on what style of music I'm in the mood to write.

The Quickest Path to Musical Inspiration

If you need some inspiration when writing vocal songs, these 3 apps have it all across every genre known to man! With everything from blockbuster movies to independent films, documentaries, and an extremely wide variety of Television shows, these three are really all you'll ever need to stay inspired.
In the mood to write a love song? There are plenty of love stories to play in the background during your writing session. In the mood to create a modern pop song? Call up some Reality, Comedies or Dramas. Need a new rock track for your band, but also want to make sure it's sync-able? Put on an Action or Thriller flick to inspire you.

This app is GREAT if you're in the mood to write quirky and fun music to classic cartoons such as Bugs Bunny, Betty Boop, etc.! Now, before you jump down my throat and scold me on how these shows are not 'current,' you're right... they're not. But you have to remember that we're not 'scoring' to any of these shows, we're simply letting them run in the background while we work. We're letting the visuals, pacing, mood, humor, action, etc., inspire us to create our modern sounding tracks.

I've always been very open about how I love home renovation shows. I've had my music on plenty over the years, and it's some of the easiest visual content for me to write to. Maybe it's because I'm a 'rock guy,' but anytime someone is swinging hammers and demoing walls, I want to hear heavy drums and driving guitars! Regardless of whether or not energetic rock tracks are what you enjoy creating, this channel has plenty of free content to keep you inspired and writing in multiple genres of music!

If watching someone bake pumpkin bread inspires you, and you're in the mood to create some light electronic tracks, then this is the channel for you. This is where I go when I want to take a break from playing guitar and experiment with more keyboard oriented pieces. Bon Appetit is especially ideal for inspiring tracks with beat-sync'd synths over laid back drum grooves, as well as acoustic based tracks.

Did you know that Lego has their own channel? If you want to write music that's youthful and 'kid friendly,' then this is a great place to start. But it gets even better because there's just something about legos that also inspires epic orchestral tracks too!! While you're most likely not going to write anything that would end up in a blockbuster chase scene while watching this channel, you can have a great time banging out epic taiko drum tracks and tension beds (among others).

Each of these free apps are commercial supported. This is an added inspirational benefit to us, because getting music placed in commercials is extremely lucrative! (Hint: You'll find that most bpms on commercials are 135 and above).
I don't know what the algorithm is, but sometimes it seems like they play 7 or 8 commercials in a row. While this would annoy the average viewer, that's enough time to come up with a few ideas to keep you busy for a while!

Ensure Your Songs Are 'Sync-Ready'

Every single one of us finds inspiration in our own ways, but if you've not written music to moving picture before, give it a shot. It's a lot of fun, can be a challenge sometimes, and you'll most likely find that it opens an entirely new creative world for you.
Just remember this: don't stare at the screen the whole time. Utilize this as simply another strategy to help keep your writing sessions inspired and moving forward.
Constantly experiencing how your songs compliment the visuals on screen is the perfect way to step up your writing game and ensure that your songs are 'Sync-Ready.'

Streaming Devices mentioned in this blog: