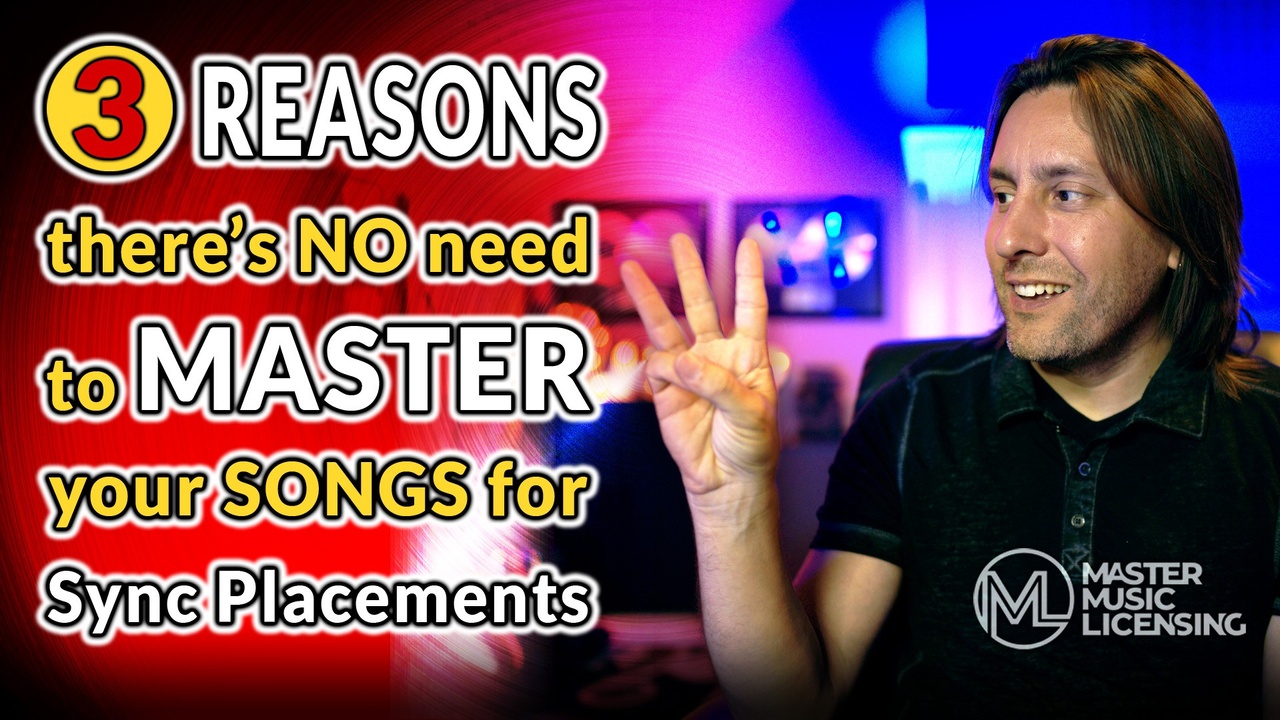 When it comes to Creating Valuable Content (the second step of my 4 Step Plan to Licensing Success), the first question that tends to get asked is regarding Mastering. It can be summarized as follows:
“Do I have to master every version of my song, as well as the stems, before I submit them to a music supervisor or library?”

The reality is that I don’t master any of my tracks, and there are 3 reasons why mastering your music for sync placements isn't necessary.

Let’s discuss each of these in a little more detail:

Traditionally, when you release an album, YOU are the one who’s delivering the final product. There are no steps beyond the mastering phase other than having your album pressed and delivered. This means that mastering is the final step in this process.

But let’s take a closer look at mastering as a whole. Why does anyone master their album? It’s simple… to allow their songs to flow into each other in a uniform way. It evens out the levels and EQ from song to song, which creates an enjoyable listening experience from start to finish.

As the artist, you are creating a final product, and mastering completes that product.

However, in the licensing world, your music is NOT the final product. It will be added to scenes along with dialog and a wide variety of sound design elements (footsteps, street noise, car engines, etc…). Your songs will be preceded and followed by music from other artists & composers.

These other tracks will have their own levels and EQ's that are not similar to yours.

Enter in the role of the re-recording mixer. This individual mixes all these audio elements together. It’s his job to create a seamless mix within the Stereo or 5.1/7.1 Surround Field.

Because your music is going through another mixing process after you deliver it, there is no need to ‘master’ your music in the traditional sense.

2.  FOR CONTINUITY BETWEEN VERSIONS…

Imagine a scene where a music editor has to create a cross fade between your instrumental mix and your full mix. If only your full mix were mastered, there would be an audible difference between the two versions, and the crossfade wouldn’t be seamless.

This wouldn't work, and you could ultimately lose the placement opportunity.

For this reason, in order to have continuity between the versions, you’d either have to master every single version and stem (a costly endeavor), or provide the unmastered mixes.

Which leads us to reason #3…

3.  A GOOD MASTERING PLUG-IN IS ALL YOU NEED…

When people ask me if I master my tracks, the simple answer is ‘no,’ however, I do run a mastering plug-in on my master fader for EVERY SINGLE MIX.

The plug-in that I’ve grown to love is Ozone by Izotope. In fact, when I’m setting up my mix template, I load Ozone on the master fader before I even press play.

Over the years I’ve created my own mastering preset based on the interaction of my speakers with my room. Have you ever mixed a track in your studio, then listened to the mix in your car and it sounded nothing like you thought it would? That’s your room playing tricks on your ears.

In addition to the overall EQ compensation for your home studio, adding a touch of compression and limiting, as well as some stereo widening (just a touch!!), has the ability to really enhance your mix the way that a professional mastering job would.... at not extra cost to you!

Here’s the deal… when you’re licensing your music, you’re no longer working in the music industry. This means that how you deliver your final product will be different between the two industries.

If you’re an artist releasing an album to the public, then you should absolutely master the full mixes and include those on your CD.

However, when it comes to delivering your songs, alt versions and stems for sync licensing opportunities, then I recommend delivering the ‘unmastered’ versions. Run them through a mastering plug-in to give them some extra depth and punch, and let the re-recording mixer handle the rest.