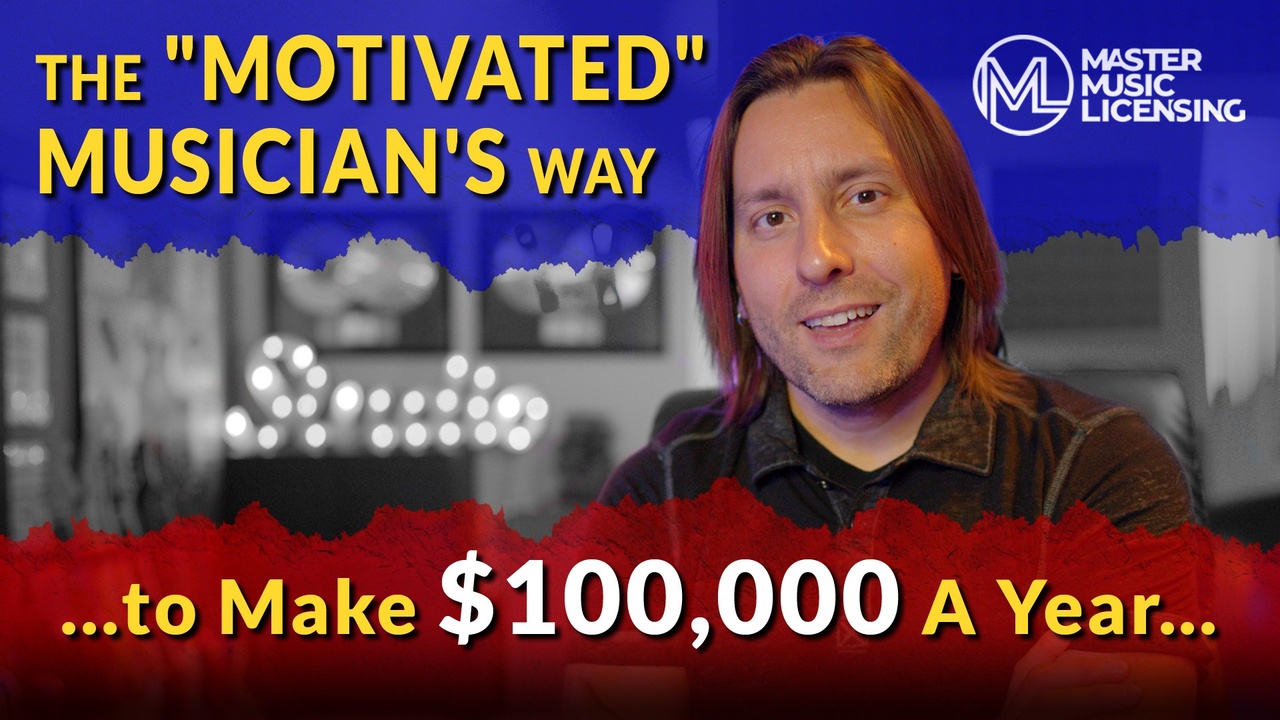 It’s no secret that licensing your music is an extremely profitable way to monetize your songs. Not only is generating a recurring stream of residual income one of the most attractive aspects about music licensing, but these days you can write, produce, and license your music from the comfort of your own home studio. So you can definitely make a six-figure income with your songs.

There are 4 paths that musicians can take to successfully create this consistent income stream. But, like any road you choose to venture down in life, there are going to be pros and cons that come along with each decision. Today I want to break down the specifics of each of these 4 paths.

If you are extremely detailed with your metadata, you understand the ins and outs of sync and master licenses, are great at marketing, negotiating, networking, building personal relationships, and most importantly, are very prompt at responding to emails and phone calls, then getting your music directly into the hands of music supervisors is the path for you.

This path requires the most involvement on your end. Why? Because it's your responsibility to fully administer your catalog. This means being able to drop what you're doing at a moment's notice to submit music for a specific request, or negotiate a sync license when your track has been chosen. The film and tv world works very quickly. If you wait too long to respond to an e-mail or phone call, the opportunity will pass by.

Taking this even one step further, in order to successfully submit music directly to music supervisors, first you have to put yourself in their shoes. Imagine for a moment that you were the one who is constantly being bombarded with music submissions from independent artists, managers, and publishers, on a daily basis. What would the subject of the e-mail have to say for you want to open it? What would the content of that e-mail have to say for you to continue reading past the first sentence or two? How would you want someone to approach you for you to even give their music a chance?

These are questions you need to consider before you start approaching others with your music. You're only going to get a few seconds of their time, so the e-mail subject line alone needs to show them the value you are bringing to the table. It could be as simple as "Songs for (TV Show or Production They're Working On)"

Ultimately what you're doing is showing them the VALUE you bring to this interaction. By letting them know that the you have music relevant to the project, or projects, they're working on, you are bringing value to them. Again, just put yourself in their shoes. If you're looking for youthful pop songs for a project, you wouldn't want someone blowing up your e-mail with links to their heavy metal album. Always think of yourself as a service to them, simply because you are supplying them with quality music that's relevant to the project they're working on.

For years I administered my catalog this way with great success. I learned an extraordinary amount about how to deliver music to supervisors in a way that would generate placements. However, as my catalog grew, I found that I was spending more time administering my songs rather than creating new ones. Eventually I had to make the decision to hand the responsibility of managing my catalog over to someone else.

It was vitally important for me to build relationships directly with those individuals who were licensing my music, and I wanted to be on their first call list when they were looking for specific requests. But, administering my growing catalog turned into a full time job, and I wasn't able to spend as much time creating. This led me to sign my catalog with an exclusive licensing agency, otherwise known as a music library.

Exclusive music libraries generally require you to sign your songs with them for a specified term length that's stated in your contract. The library may take all, or a percentage of the publishing for your songs, as well as a percentage of all licensing fees. The most common deals are those where the library takes your publishing during the contract term, and splits the upfront licensing fees 50/50 with you. However, each contract is different. Also, depending on which company you're working with, these contracts can be fully negotiable.

Many songwriters are initially hesitant to give up any rights to their songs. They've put so much blood, sweat, and tears into them, and they are so passionate about their songs, that they're often afraid of losing 'ownership' of their music.

This is completely understandable, BUT, every songwriter needs to understand that once you're written a song, you will forever be entitled to the songwriting income from that song. Every song is broken up into 2 halves.  50% of the song's income is always allocated to the songwriters while the other 50% goes to the publisher. The publisher is the 'administrator of the copyright,' which simply means that they're the entity that handles all the administration, negotiation, contracts, etc., when it comes to generating income from the song. It's important to remember the phrase, “it takes money to make money.” This couldn’t be more true when it comes to music publishing. You have to give the publisher, or in this case the exclusive library, a reason to work and promote your music.

Exclusive Music Libraries employ a highly specialized staff who have relationships with music supervisors, music editors, production companies, trailers houses, etc., and are constantly working the songs in their catalog, submitting them for placement opportunities, negotiating license fees, collecting those fees and paying songwriters their share.

From my own experience, I've have extraordinary success working with exclusive music libraries simply because their teams have been able to generate many more placements than what I was able to generate on my own.

One of the most exciting aspects of this path is being able to check my cue sheets every few days, and see the new placements that have come in, all while comfortably working away on new material in the privacy of my home studio.

Even with all the benefits of working with an Exclusive Music Library, there are still many musicians who are just not comfortable with the idea of giving up the publishing on their music. For those individuals, signing with a Non-Exclusive Music Library would be the best option. Commonly known as ‘re-titling deals,’ these companies will take your song and license it under a new title. This allows you to retain full ownership of your songs under the original titles.

For example, let's say you write a song called "Blue Sky" and sign it non-exclusively to Company A. Company A absorbs your song into their catalog, but re-titles it "Sunny Day." When they pitch and place your song, it will be under the title "Sunny Day."

Being that you still fully own all the rights to "Blue Sky," you are then free to sign it non-exclusively over to Company B, who may re-title it "Sunday Drive."

Now you have two companies pitching the same song, but under different titles, while you still own and control 100% of "Blue Sky." Sounds like a great way to really monetize your song right? Well, through the mid-2000's this was a quite popular... until technology caught up.

Here's the problem. Music recognition programs can listen to a song and, just by the waveform, decipher what song it is. This is the same technology that apps like Shazam use. But for this example, let's say Company B got a feature placement of that song on a popular TV show. They are entitled to the publishing royalties from the performance of that song when the show airs, but the music recognition algorithm recognizes the song as "Sunny Day," and Company A is paid instead. This can, and will, cause a problem down the road.

The 4th path to monetizing your music are royalty free music libraries. These are often companies that supply music to low budget projects such as wedding videos, student films, etc. It's common for directors or producers to have a yearly or monthly subscription to these libraries, where they have access to all the tracks in these catalogs without paying a royalty.

What this means for musicians is that you will not receive backend royalties for the use of your music. I've been in the industry for a long time, and have yet to meet any songwriter or composer who is doing exceedingly well writing for a royalty free music library.

However, in order to learn more about them, I wrote about 40 pieces of music for a popular royalty free company. I placed those pieces in their library for about a year. They generated roughly $300 in that time. After that first year I removed them, and placed them into my exclusive catalog. Within a just few months, 4 of those initial 40 pieces generated over 10 times my first year’s earnings.

It's always a good idea to listen to the tracks that are in each library's catalog. This is a great litmus test for the overall quality of the catalog and the revenue it will generate for you. Also, check the library's credits. Are they getting placements on TV Shows or Films? Who are their clients? A few minutes spent researching goes a long way.

If you’re just starting out, learning production, building your catalog, and gaining experience in the licensing world, then a royalty free library may be the perfect fit for you. However, if you already have a catalog of quality music, you may want opt to explore the Exclusive Music Library or Non-Exclusive Music Library Route first.

So, can you make $100,000 a year writing music? The answer is YES. It is 100% achievable. Do you have to be out hustling every night, playing smokey bars, selling your CDs and merch, and driving through all hours of the night in a cramped van just to get to the next venue? The answer is no.

The way to make $100,000 a year writing music is through consistent placements.

Licensing your music is not hard, and there is a 4 step system that allows you to generate consistent placements. You can learn more about it here:  The 4 Steps to Successfully License Your Music.

Which path is right for you? Share your thoughts with us in the comments section below.