Why Cue Sheets are ESSENTIAL for Today's Songwriters... 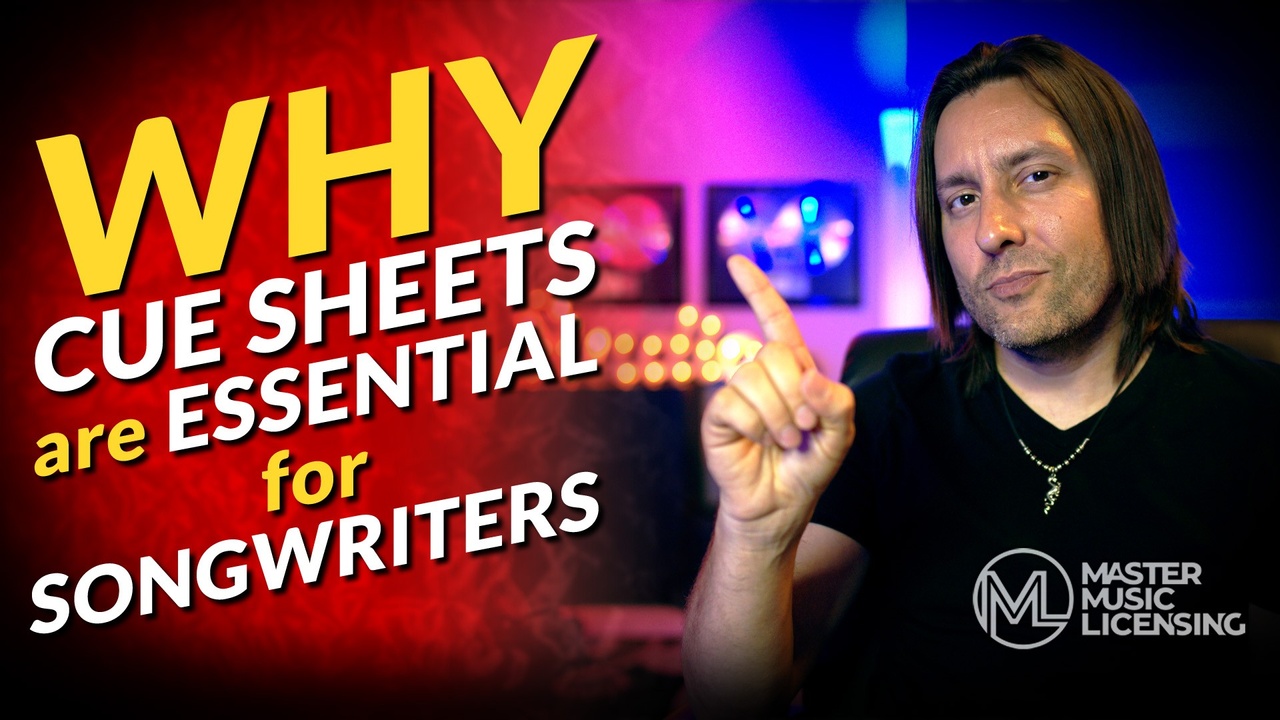 For example, in one sentence I may refer to a new piece of music as a Song, and in the next sentence refer to it as a Track, and then, yet again, as a Cue, and finally, as a Work:

What’s the difference? In a word… nothing. However, the term "Cue" refers to a piece of music that's written for, or sync’d to, picture.

A cue sheet is simply a summary of all the music used in a particular production. For example, a 1 hour television program can contain upwards of 80 to 120 individual pieces of music, and without a cue sheet, it would be impossible for the PROs (ASCAP, BMI, & SESAC) to accurately track every single piece of music that was used.

The cue sheet is filled out by various staff members of the production company, and is then submitted to the PROs. This is how the PROs track the use of music in tv shows, films, and commercials. Ultimately, cue sheets are directly responsible for how you, as the musical content creator, get paid.

This is why it’s important to not only register your music with your Performing Rights Organization, but to also include THOROUGH metadata (Step 3 in the 4 Step Plan to Licensing Success) with every piece of music you release.

One of the benefits of having your catalog administered by ASCAP is they let you view your cue sheets in the Member Access Portal. Not only does this allow ASCAP writers to keep track of their performances, but for the savvy musician, it allows you to research other potential writers and/or publishers to partner with. This ability to view your the cue sheet provides you with a wealth of potential opportunities... IF you're willing to do the research.

What's Included in a Cue Sheet?

There is a lot of information contained in a cue sheet, including:

In this first example below, we see all the details related to the specific tv show. In this case, it’s an episode from Season 11 of American Idol that was Produced in 2012. The Episode Title is "1115 1116," with a total duration of 2 hours. In that 2 hour time span, the Music Duration is 1 hour, 21 minutes and 41 seconds. You can't see it in these images, but the total number of music cues used in this episode is 173.

As we scroll down through the Cue Sequences, we see that the 20th piece of music in this episode is the song "Lose" that I wrote with David Thiele. This track was from the self-titled Chasing Saints album, and you can listen to it HERE.

In this particular episode of American Idol, the placement Duration was 20 seconds. The Performance Type was a Background (BG), and Usage shows that it was a Background Instrumental (BI). I don’t know if the editors used the instrumental version of the song, or just a musical section from the full mix. Regardless, this is a great example of why Step 2 in the 4 Step Plan to Licensing Success is so Valuable to your end users!

The episode aired in February, and the first royalty statement this particular performance appeared on was the 3rd quarter statement released in October. The Total Royalty Earned from this 20 Second Performance was $125.40 in that October statement.

To compare and contrast the difference in royalties between a Background Instrumental, and a Featured Vocal, a 21 Second Featured Performance of one of my vocal songs, on another Primetime Network TV show, Generated a Total of $644.10 in a single quarterly statement.

Sticking with the American Idol theme, let’s look at the cue sheet from another episode. 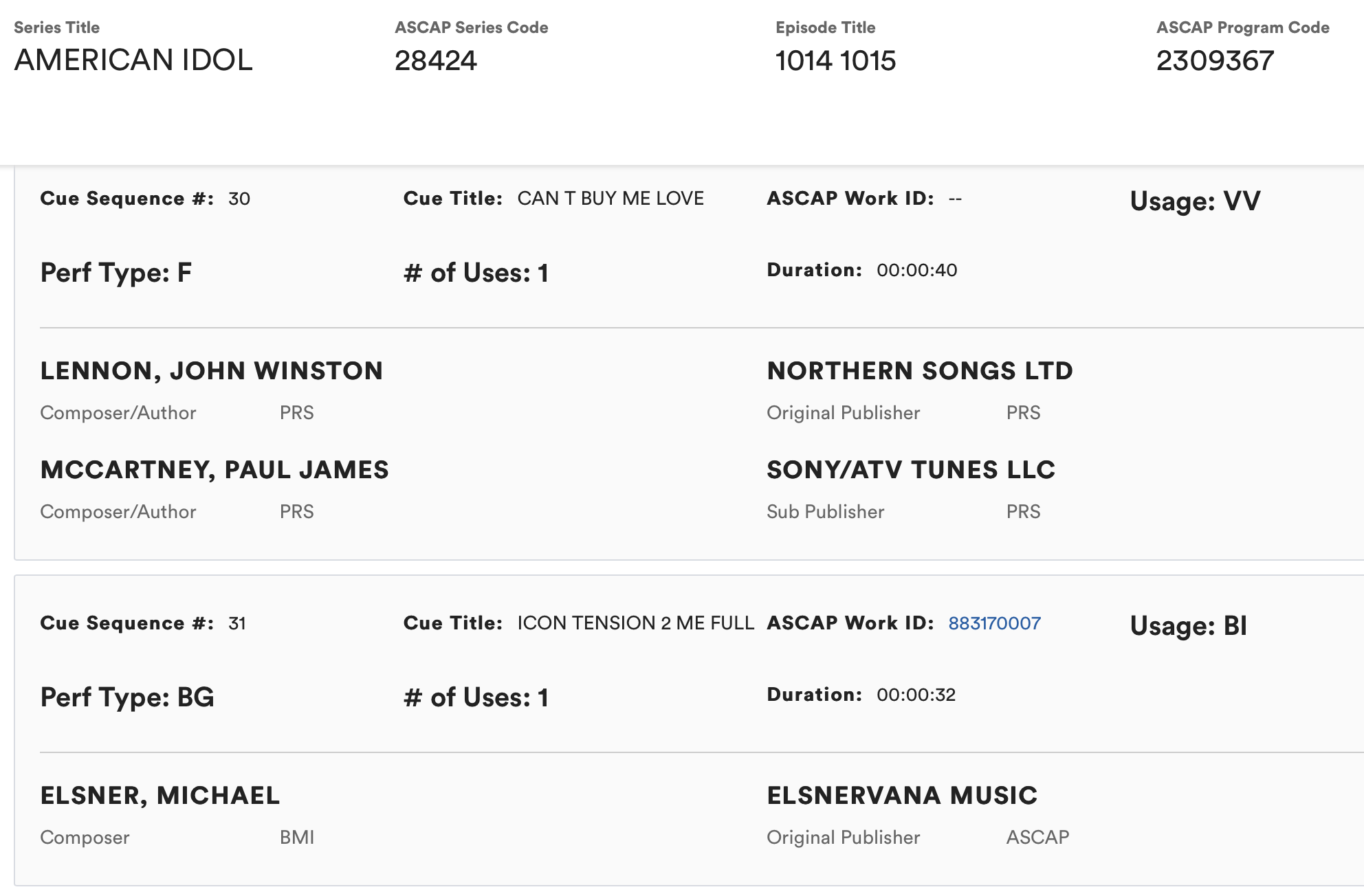 In this example, my track "Icon Tension 2" was preceded by a 40 second performance of the Beatle’s song "Can’t Buy Me Love." When we look at the Usage and Performance Type, we see that this was a Visual Vocal (VV) Usage as well as a Featured (F) Performance. My assumption is that this Beatle's song was performed by one of the contestants, thus the Featured Visual Vocal aspect of this cue.

I won't assume what the royalty on the Featured Vocal performance of "Can't Buy Me Love" was because, as you just saw, a featured vocal performance is paid on a much higher scale than a background instrumental, but I will share that the Total Royalty Earned from the 32 seconds of Icon Tension 2 was $202.60 in that quarterly statement.

The 4 Step Plan To Licensing Success

I hope this clears up any questions you have regarding cue sheets, the difference between featured vocal and background instrumental performances, and exemplifies the importance of making sure that your songs are not only properly registered with your Performing Rights Organization, but contain thorough metadata when you're submitting them for licensing opportunities.

Anyone can get lucky with one or two placements, but you build your long-term music career by understanding How to Generate Consistent Placements of your music.